David Madison has a PhD in Biblical Studies from Boston University. His strong interest in the Bible began during his teenage years, growing up in rural Indiana in a conservative Methodist home. His parents were not fundamentalists, however, and his mother introduced him to liberal Protestant Biblical scholarship by way of the 12-volume Interpreters Bible.

After graduating from Indiana University he moved on to graduate school in Boston. But seminary studies, which included mind-numbing courses in theology, proved to have a corrosive effect on his faith. This process of faith disintegration continued even as Madison served as pastor of two Methodist parishes in Massachusetts. As Dan Savage has said, he didn’t lose his faith, he saw through it.

He eventually made his escape from the church and pursued a business career. But his fascination with Biblical studies did not diminish, especially since the Bible is a self-incriminating document. He pursued theological reading as well, and marveled that serious thinkers could take it seriously. Sam Harris says it best: “Theology is now little more than a branch of human ignorance.”

Madison’s concept for his book gelled as he reflected on the problems that hobble Christianity. There are, in fact, far more than ten problems, but the deconstruction of Christianity can be accomplished more efficiently by gathering them into ten categories. People like top-ten lists. How wrong can David Letterman be?

These are a painless way—though not for those who panic at the idea of losing faith—to grasp that Christianity has been falsified. It shares the same fate as thousands of other religions that have faded from human awareness.

Books by the Curator

Books by the Curator 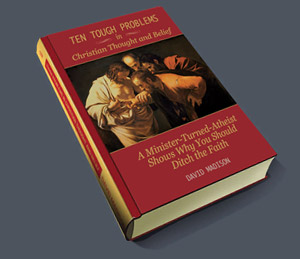 Get Updates on the Library